Hi Serena, welcome to Inheritance Books. Tell me a bit about yourself. 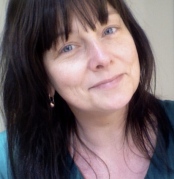 Hi – and thanks so much for having me today!

My first book All Over the Place is probably best described as contemporary romantic fiction, with a chick lit feel. It’s set mostly in and around London, with scenes in New Zealand and Paris. (Because who needs an excuse to send their characters to Paris?)

Like Livi, the book’s heroine, I’ve been all over the place, living in seven cities in four countries. I have a BA in Scandinavian Studies and a Diploma in Equine Management. Neither are currently very useful, but you never know when they’ll come in handy for a story! I’ve done all kinds of jobs – editing an international medical journal, developing photos for the Commonwealth Games, temping in a City law firm, and teaching English as a second language to wayward teenagers. For the last few years I’ve been writing, editing and proofreading on contract – and working on All Over the Place. I’m a believer in magic, possibility and second chances. And happy endings!

Sounds like you have lots of fodder for writing novels!

Which book have you inherited from the generation above you? Why is it special?

I’ve cheated a bit on this – I chose seven books! The Narnia books are special in my

family. My parents bought these copies for me from the Scholastic book club. Every month I ordered the next book – and it was so hard to wait! I don’t think I could pick a favourite. The Lion, the Witch and the Wardrobe, of course. But The Voyage of the Dawn Treader is also a special one for me. I love the image of the tiny and valiant Reepicheep paddling his little coracle to the waterfall wave at the edge of the world, then going up and over to who knows where…

I cherish these books for their magic and their extraordinary storytelling, and the certain knowledge that in the end, good will triumph and there is a point to it all. Wherever you stand on life, the universe and everything, that’s something to hold onto I think.

I was so worried when they announced the most recent film versions – it would be so easy to ruin it! I’ve only seen the first two films, but I thought they were perfect. And what’s more, they were filmed mostly in  New Zealand, where I live, so that’s extra special.

I think we can allow the Narnia series as one choice. Which book would you leave for future generations? Why?

I have two boys, so they’ll probably never even pick up any of my most-loved books!

I hope one day they’ll enjoy the Narnia books though. So with my nieces (and maybe future grand-daughters!) in mind, I’m going to say These is My Words by Nancy E. Turner. I can’t say enough about how wonderful and heartbreaking this book is. The author was inspired by her great-grandmother’s experiences in the Arizona Territory, as it was called in the late 1800s. The hardships and trials Sarah Prine faces in the book are unimaginable. Her courage and her determination to educate herself, care for her family and survive in the harshest situations is inspiring. And the love story! Warning – keep tissues near. You will cry.

I actually gave this book to my sister when she was leaving to nanny for our cousin in Phoenix, thinking it would be interesting for her to know some of the area’s history. But when I started reading the first chapter, I was hooked – so she received a pre-read book! (Just loosening the pages. It’s helpful, right?).

Thanks for sharing your favourite books, Serena. I hadn’t  heard of These is My Words before. It sounds wonderful.