Hi Trish, welcome to Inheritance Books. Tell us a bit about yourself.

Rhoda, thank you so much for having me on your blog, and I love this idea. 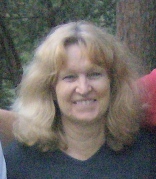 I was born and raised in a beautiful, prosperous country in Africa that used to be known as Rhodesia and is now Zimbabwe. It was colonized by the British in the late 1800’s and the society was based on British culture. After I married my childhood sweetheart, a communist-backed guerilla war made it necessary for us to carry an Uzi around in case of an ambush or home invasion, and eventually my husband and I had to make the decision to leave our homeland.  Today Zimbabwe is the poorest country in the world.

We immigrated to the United States in 1990 with our three children and have been very happy here ever since.

KICK ASSITUDE, my upcoming book to be released by Uncial Press on March 15th, 2013 is a romantic suspense with some comedy thrown into the mix. It is the sequel to REDNECK P.I.

I’m currently working on a 12 book more serious romantic suspense series in which each book’s heroine will belong to a different star sign. CAPRICORN CRAVINGS is currently with an agent, and I have made a start on AQUARIUS ARDOR.

Which book did you inherit from the generation above you? Why is it special?

It’s hard to choose one book from the awesome collection of old books my parents left to me. My mother introduced me at an early age to books from her childhood by A.A. Milne, and Rudyard Kipling’s Book of Verse printed in 1935, both of which I loved. Being a horse lover I especially enjoyed The Ballad of East and West, about a horse race.

It wasn’t cool to read what your parents read when I became a teenager, but I  think the first novel of theirs I ever read, which changed my mind about their taste in books was “Gone With the Wind”.

Being one of the world’s most read books, most people have read it or at least watched the movie. For those who haven’t, it’s about the deep south in the USA, and Scarlett O’Hara, a spoilt young woman  from a wealthy family, who finds herself in dire straits when the civil war comes to her family farm near Atlanta, Georgia. Her leadership skills come to the fore, and she does what she can to help her friends and faithful slave Mammy to survive in the most horrific conditions. Ironically, the sickly wife of Ashley, the man she loves and wants, becomes one of her charges. Rhett Butler, the ultimate sexy, handsome hero, falls in love with her, helps her to survive, and eventually marries her, but she can never shake off her feelings for Ashley.

The love scenes were very daring for the times in which Mitchell lived, and it is said that it caused a rift between her and her husband.

When I read it, I never imagined I would one day be able to visit Margaret Mitchell’s actual turn-of-the-century (1900) house in Atlanta, Georgia.  It is the house she lived in when she wrote the book, and has been restored and made into a museum. I have also been to Charlotte, North Carolina which features prominently in the book, and where homes that existed when the book was written are still standing.  Going there made me realize that a lot of the events in the story probably really took place to real people.

Gone With the Wind was a great influence on me and my writing, and it is the reason I love to write romantic suspense.

Which book would you leave to later generations? Why?

Gone With the Wind is now on my bookshelf, and it is most definitely one of my greatest and timeless treasures. I believe my children will cherish it just as much when it’s their turn to inherit it.

Thank you for sharing your favourite books, Trish. Good luck with Kickassitude (what a great title!).

You can find out more about Trish on her website (www.trishjax.com), her blog and her author pages at Uncial Press and Amazon. Kickassitude will be released on the 15th of March 2013.