This week, the lovely Jean Bull shares her Inheritance Books. Jean was another person I met  when I went to the RNA conference. We were billeted in the same student house during the conference. We ended up leaving each other notes speculating on how the shower worked and came to the conclusion that it didn’t.

Hi Jean, welcome to Inheritance Books. Tell us a bit about yourself.

I’ve been writing for several years and have self-published two books: one an historical novel, set in 1930 about a girl who wants to fly a Gipsy Moth like Amy Johnson, and the other a collection of short stories with a summery theme. I’m a member of The Romantic Novelists’ New Writers Scheme, and one day I would love to be published by a main stream publisher. I’m working on a new novel now set in the First World War and another collection of short stories, this time with a wintery/Christmassy theme. I find it’s good to have something else to turn to when I get lost for words!
Which book did you inherit from the  generation above?

I didn’t inherit the book I’ve chosen from my family, but was given it by my friend’s mother who was a writer, and liked to encourage me to read, not that I didn’t. In fact, apart from my favourites the Famous Five and The Bobbsey Twins, I used to love to read my mother’s copy of What Katy Did, and her wonderful book of fairy stories, some about boys named Jack: Jack and the Beanstalk, Jack the Giant Killer etc, but sadly, I no longer have either of them, though I’d love to find a copy of the fairy tales. I remember one had illustration of Jack, standing on a stepladder, and polishing a giant’s boot until he could see his face in it.
The book I have chosen is Child’s Garden of Verses by Robert Louis Stevenson. The first poem I read was From A Railway Carriage – Faster than Fairies, Faster than Witches. Fabulous with the rhythm of the words reflecting the rushing train. Stevenson spent a lot of his time alone, ill in bed, and although I wasn’t ill like that, I didn’t have any brothers and sisters, so felt quite lonely at times, and the poems in the section The Child Alone, like The Unseen Playmate, really struck a chord. Looking through it today, I think the illustrations by A.H. Watson perfectly enhanced the magic and the mood.
Which book would you leave to the generation below you? Why is it special?

The book I would like to leave to future generations is The Snow Child by Eowen Ivey. One of the reasons that it’s taken me so long to take part in Inheritance Books is that I couldn’t decide which book to chose. I’ve enjoyed wonderful books recently by Jojo Moyes, Hannah Richell and Kim Edwards, not to mention books by new RNA authors like Liz Harris and Liz Fenwick, but Eowen Ivey’s book is really unique. It is a fairy story (surprisingly!) for adults, based on The Little Daughter of the Snow by Arthur Ransome, itself based on an old Russian fairy tale called Snegurochka, but Eowen lives in Alaska and has set her story there. It’s about a late middle-aged couple who have lost their first baby and have moved from a comfortable farm in Pennsylvania to make a new start. As in the old Russian tale, they build a snow girl out of snow who comes to life, or does she? Throughout the whole book, you are kept guessing. The cold Alaskan winter and brief summers are finely drawn and reflect the hopes and dreams of the couple, called Mabel and Jack (I see a theme developing here!) It’s a spellbinding and enchanting read for anyone from about twelve to ninety two!
Thanks for sharing your choices Jean.  I’m off to check out The Snow Child right now. It sounds lovely! 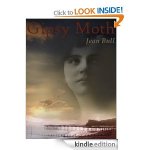 Jean’s novel Gipsy Moth is available  on Amazon.
You can follow her on Twitter @jean_bull, or visit her blog at jeanbullswritingblog.blogspot.com where you can find out more about The Snow Child.