Today’s guest on Inheritance Books is fellow RNA member and all round lovely person, Marie Laval. Hi Marie, take a seat. Why don’t you introduce yourself.

I am French and have been living in Lancashire for quite a long time, almost long enough to have got used to the rain! I grew up in a small village near Lyon.  I studied law and history at university there and for many years my ambition was to be a journalist. I was always very attracted to England and to anything English – I blame great authors like Daphné du Maurier, Jane Austen and Wilkie Collins – so I came to live in England shortly after graduating. Unfortunately, I did not become a journalist, but held a variety of jobs, mostly in admin at the University of Manchester. I retrained as a teacher a few years ago and now work in a large secondary school. When I’m not busy looking after my family and planning lessons, I dream up romantic stories! I started writing short stories and now write full-length contemporary and historical romance. My novels are published by Accent Press. 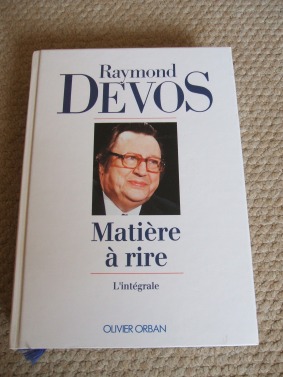 It was so difficult to pick just one book, Rhoda! I inherited a lot of books from my parents, mainly novels, which are at present sitting in cardboard boxes because I am supposed to be moving house in the next few weeks.

One of the books that means a lot to me is a collection of humorous texts by the talented French comedian and writer Raymond Devos. The man was so much more than a comedian. He was a genius with words, and I remember how proud and grown-up I felt when as a teenager I was able to finally understand some of his jokes and puns! ‘Histoire d’en Rire’ was the last ever book my sisters, mother and I bought for my father for his birthday, and I will always cherish it.

Most comedy writers have some genius with words. (Terry Pratchett, PG Wodehouse…)

Once again, a very difficult choice. I hesitated between two but in the end chose ‘Le Lion’

by Joseph Kessel (apologies because it’s in French!). ‘Le Lion’ is a novel I treasured since I first read it aged twelve or thirteen. I brought it to England with me when I moved here, and as you can see the cover is rather battered. The story is set in Africa, in the land of the Massai people, and is the tale of an incredible friendship between a little girl and a …lion, of course! After many adventures and plot twists, the story doesn’t end well for the lion. Joseph Kessel was a great writer, a journalist and adventurer, and a pioneer of aviation in the 1920s. I read most of his novels, which gave me a yearning for literature and faraway lands. Many of his stories were made into films, starring great French actresses such as Catherine Deneuve and Romy Schneider.

I do hope my children grow up to be as fond of ‘Le Lion’ as I was.

You’re welcome! Thank you for sharing your favourite books with us, Marie. All the best with the new book!

Blue Bonnets, the second in the Dancing For The Devil Trilogy are now out and are available from Accent Press and Amazon