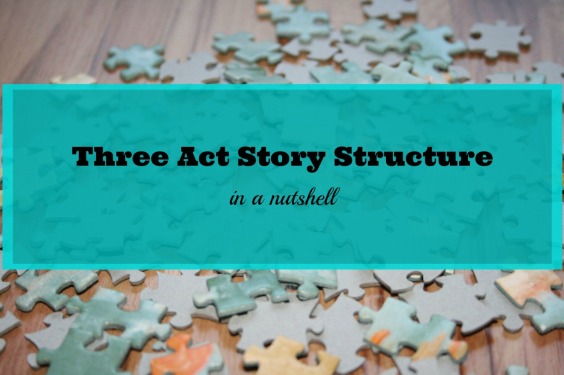 My column for the Beverley Guardian usually goes online a few days after it comes out in print, but this one seems to have slipped through the net. It’s about three act story structure and I’m recreating it below. I struggled with plot/structure when I started out, so I read lots and lots of books on it. I still do because it’s fascinating (… I really need to get out more).

Have a look at the books that have been bestsellers over the last few years – Harry Potter, Gone Girl, Fifty Shades, anything by James Patterson or Dan Brown. What do they all have in common? It’s not genre or writing style. No, the thing that makes them stand out is that they all have a cracking story.  The story is the thing that drives you to keep on reading long after you should have gone to sleep. What makes a book great is when it makes the reader care about what happens next.

You may be lucky enough to have a story that came to you fully formed with enough tension to keep people hooked from page one to the end. This rarely happens. For the rest of us, there’s plot. If the  story is a beautiful creature, plot is the skeleton that gives it shape.

The first thing to realise about story is that it’s not the same as real life. It’s less boring. Real life is a messy, haphazard collection of events. When you’re telling a story, you only need to show the bits that are relevant to that story. There’s a reason characters in books rarely go to the toilet or have to go buy cornflakes. Your novel has no place for the boring necessities of life (unless they are relevant to the story).

There are many, many models of story structure. If you want to look into it, I recommend Story by Robert McKee, Save the Cat by Blake Snyder (both aimed at screenwriters, but what they say is just as relevant to novelists) or Plot and Structure by James Scott Bell. Or indeed ‘Novel writing for Dummies’. They all say the same things, in slightly different ways. The old fashioned phrase for it is ‘3 act story structure’. Otherwise known as having a Beginning, a Middle and End.

We all know that stories need to have a beginning, a middle and an end. But what does that actually mean? All novels are about change. The protagonist undergoes some sort of journey in the course of the book. This is the core of your story.

The beginning (Act 1) allows you to show the reader how things are at the start. It’s where you establish character, setting and maybe the main conflict (E.g. there’s a kid called Luke Skywalker, he’s bored and craves adventure and there’s a war against the empire that needs a hero). This section is usually quite short.

Human beings are naturally resistant to change, so something needs to happen to force the protagonist to change the status quo. (e.g. Luke Skywalker finds an SOS message). This starts the move into the middle (Act 2). There’s an impetus to change, but the main character can still turn back and go back to the comfort of what was familiar. The next event pushes the character firmly over the threshold and then bricks up the door behind them. This point of no return commits the character to the journey. There is no turning back (Luke’s Uncle and Aunt are killed and his home destroyed). You have now reached the middle.

The Middle is the biggest part of the story and often the hardest part of fill out. You know the start. You know the end. How the heck do you fill in all those words in between the two? I’ll talk about tension and saggy middles in a later column.

Go back to your piece of paper. Write down a few events that happen. Plot points, if you like. How do these plot points move the story along? Move the sequence of the events around so that they increase in difficulty the closer they get to the end. This will help give you rising tension as the story progresses. Look at the last challenge your protagonist has to face. Can you make it more difficult? What’s the worst that can happen? Write that down.

Each event/plot point should push the protagonist to make changes that will take them further along their journey. What the actual events in the plot are will vary – it could be training to be a Jedi, or opening a bakery, or working out puzzles to find the arc of the covenant – it doesn’t matter, so long as it’s relevant to your story. Eventually, your protagonist will reach a point where they have to make a choice. They have to either commit to change or fail. Often, this is the point where things at their worst. Romance novelists call this the ‘black moment’. It’s when the main character is so low that death (literal or metaphorical) hangs over them. In order to save themselves they have to embrace the change. Use the Force, take a leap of faith, learn to trust. The new, stronger protagonist can now punch their way out of whatever trouble they’re in and propel the story on towards the end.

It is possible for the character to decide not to change. This works too, so long as there is a moment of decision. Whatever was wrong at the start of the story will still be wrong, but the main character returns to it with new understanding (or dies).

The end, like the beginning, is short. It allows you to tie up the loose threads of the story.  It also allows you to ease the tension down from the crisis point so that the reader is left feeling satisfied by the end, rather than stressed. This is not to say that your story has to have an upbeat end. A good tragedy can be just as satisfying as a happy ending.

The next column is on conflict. I’ll post it as soon as it goes online. If you have any suggestions for what to tackle in future columns, let me know in the comments below.

(And if you fancy talking to me in person, I’m doing a course in York in May …hint, hint).

4 thoughts on “Plot – three act story structure in a nutshell”