I’d like to welcome Jenny Harper to the Inheritance Books sofa. Hellooo Jenny. While I go put the kettle on for tea, why don’t you tell us a bit about yourself?

I’m active, restless, easily bored, good at many things but world-class at nothing (except perhaps procrastination).

To address the first three of these features, I have always played a lot of sport – table tennis, tennis, squash, badminton, golf – and I have always walked (power walking and country walks). And I write. This fixes the boredom – after all, who could ever be bored while creating characters to wander round a world of your own imagination, or wrestling with plot points and quandaries?

I’ve always written. I guess most writers have. I was put off creative writing at uni, when a degree in literature made me quickly realise I was never going to be another Eliot or Austen. Instead, I became an editor (non fiction books), but soon realised the pace of editing was too slow for me. I turned instead to editing magazines (quick turnaround, destined for the dustbin after a month) and soon got commissions for writing, both articles for magazines and newspapers, and for books.

And so I was back, despite myself, to writing. Mastering the art of penning novels has taken me longer than I expected and they may not be world class  – but I do keep trying!

I know exactly what you mean about not being another Eliot or Austen. It took me a while to realise that I didn’t need to be. I just had to write like me! 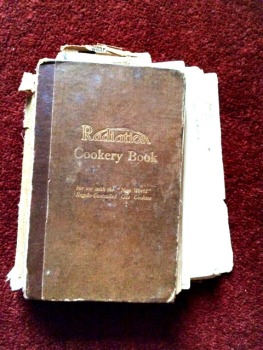 This is my grandmother’s cookery book (so two generations above, I guess!). It has been well used, as you can see. Even though I don’t refer to it so much these days, many recipes bring back nostalgic memories – such as when my brothers used to make the marmalade pudding. The recipe said ‘for 4’ and there were two of them … so they doubled the quantities.

What’s not to like about a cookery book? Making food and sharing food is about so much more than satisfying a basic human need. It’s about love, and friendship, and the sharing of pleasure with friends and family, on special days or just every day.

Mary Berry recently made the point that cookery books never used to have illustrations. This one doesn’t. It leaves you to focus on the making, not the looking, and to present a dish in the way your imagination tells you to. (Not that I don’t like looking at lovely pictures of food…)

My grandfather was a bookseller in Perth (Scotland), and our bookcases at home were filled with beautiful hardbacks from his shop. As a child, I read the lot because we didn’t have a television and I loved reading. Those books shaped me – and sadly, I can’t imagine that too many young teenagers these days read all of Dickens, Thackeray, Trollope and Eliot. There are too many brightly coloured distractions.

I love pretty cookbooks (and I have many), but the most useful cookbook I have is a 1000 recipes cookbook my Mum bought for me, which has hand drawn (i.e. useless) illustrations, but excellent instructions. 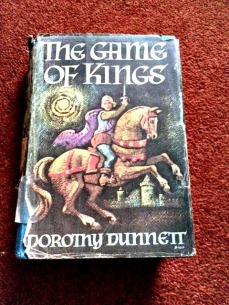 Anyone who knows me knows I am a huge fan of the historical writer, Dorothy Dunnett. Her Lymond series starts in Scotland in the 16th century and sweeps across most of Europe and Russia. It’s astonishing in its vivacity, veracity, accuracy and the incredibly convoluted and tense story that spins out across six long novels. I read them end to end when they first came out, late into the night and at work, while I was cooking or bathing or on the bus – anything to consume them as quickly as possible. And then I read them again, and still read them every five years or so.

The hero is the greatest super hero of all time. He’s also, one is led to believe, a villain, and although your heart tells you he’s wonderful, the trail of clues Dunnett lays down often lead in quite a different direction. He is a consummate swordsman and linguist, musician, huntsman, leader of men and lover. His followers would die for him and his enemies would kill him in the most vicious way they can devise … and his own love story is the grandest passion ever.