It’s been a while since we had someone sitting in the Inheritance Books sofa. I’m delighted to have a visitor today, so welcomd Barb Taub, to Inheritance Books. While I go put the kettle on and fetch the biscuit tin, why don’t you tell us a bit about yourself. 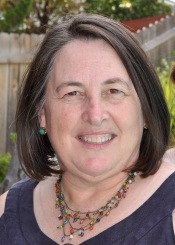 In the halcyon days BC (before children), I wrote a humor column for several Midwest newspapers. With the arrival of Child #4, I veered toward the dark side and an HR career. Following a daring daytime escape to England, I’ve lived in a medieval castle and a hobbit house with my prince-of-a-guy and the World’s Most Spoiled AussieDog. Now all my days are Saturdays, and I spend them consulting with my occasional co-author/daughter on Marvel heroes, Null City, and translating from British to American.

Which book have you inherited from a generation above? Why is it special? Try and talk about what the book symbolises to you/reminds you of etc. 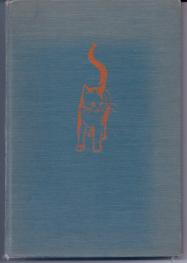 My husband’s parents married young, and soon had two young children. Money was tight, but that didn’t stop them from passing along their lifelong love of books. One that was acquired early and read often was The Story of Serapina, an unusual cat who came to help the Salinas family, mostly by using her amazingly long and dexterous tail.

” … it took some time for Mrs. Salinus to accustom herself to the presence of Serapina in her house, although the children were delighted. Never before had there existed such a cat who woke the family, took in the milk, supervised baths, played ball and baby cat! It was embarrassing, and caused disparaging rumors as to the sanity of the Salinus family in the neighborhood. But Serapina, in a great and gruding sacrifice to modesty, set them straight ….” —The Story of Serapina, Anne H. White, Viking Press, 1951 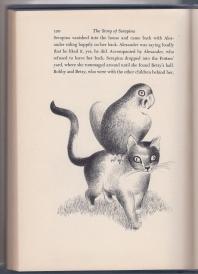 The funny adventures and gentle black and white drawings were an instant hit. My mother-in-law passed on this book to our children, and Serapina became a part of our own family, bequeathing her name to our own Serapina cat.

On top of that, my wonderful mother-in-law spent many a Saturday going to yard sales and buying books. It was always a hugely exciting day when one of those book-filled boxes arrived. She didn’t believe in “children’s literature”, so our kids received—and devoured—everything from Shakespeare to SciFi.

At their grandmother’s funeral, each of my children spoke about how much those books she’d sent to them had meant in their lives. She had given them so much more than The Story of Serapina, beloved as it was. Thanks in large part to the legacy and love of books she passed on, every member of my family is a writer today. We’re in different fields, but all those books are our teachers and our guides.

That sounds like a lovely family heirloom. I had an uncle who used to turn up with bags of second hand books. Relatives like that are treasures.

This is actually a question I’ve already faced. You see, our family has a little problem when it comes to books. We like to get them. We don’t like to give them back. We never had a lot of money to spare, and we couldn’t get our kids the latest electronics or take them on trips to Europe. But we could afford books. So every milestone was recognized with a book, every special victory or occasion marked by a trip to the bookstore to choose a new one.

When we were moving to England a few years ago, I knew we would have to move the books. But there was no way we could store all of the literally thousands of volumes crammed from basement to attic in our old victorian. We went through, pulling out our old favorites, the companions from so many wonderful literary journeys. Regretfully, we boxed up the remaining books—over 2500 that we sent to our local library. What did we keep? Any childrens’ books, of course. Special series, the first set of Harry Potter, copies of classics, books with special inscriptions across the flyleaf, and some that were just too beloved to part with.

We sent over a hundred boxes of books to storage. It’s been so strange to be here in the UK without our books, our old friends and companions. We still buy new ones, of course, but now they are for our Kindles, so our house doesn’t have shelves groaning under the weight of books. Which book will I leave for future generations? They can have their pick. There are about five thousand of our old friends waiting patiently in storage. They won’t disappoint.

I can totally sympathise. I did something very similar when I was sixteen and moved to the UK. Every time we move house, we have a ‘book cull’ and send bags and bags of them to the charity shop. There are still hundreds of books. Oh well. Guess we need a bigger house.

Thanks for sharing your Inheritance Books with us, Barb. Best of luck with Null City!

You can find out more about Barb on her website,Facebook or Twitter (@barbtaub) and check out her Null City books on Amazon.