Hi Sandra, welcome to Inheritance Books. Please, tell us a bit about yourself. 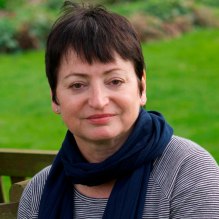 I have been reading books and writing stories forever, I actually cannot imagine a day going by without doing one or both. I think there’s something a bit OCD about me because I have a bit of a panic if I leave the house without a book to read, and a pen and notebook in my bag for scribbling down story ideas, and iPhone or camera for taking photos of something I can use as a story trigger. I was stopped in the street recently when I was photographing a bright red postbox, a woman came out of a nearby house and demanded to know what I was doing.

I grew up on a dairy farm in Yorkshire. My Mum loved reading and I devoured everything she did, from Maeve Binchy to Mary Stewart. My Dad preferred watching old war films so I absorbed a television diet of ‘Dad’s Army’ and ‘Tinker Tailor Soldier Spy’ plus films such as ‘Ice Station Zebra’, ‘The Dambusters’ and ‘Kelly’s Heroes’. The turning point for me as a writer was when I was 11 and, bored on a visit to my sister’s house in Oxfordshire, my English teacher brother-in-law gave me his copy of ‘Animal Farm’. That was it, I was enchanted by the ‘art’ of storytelling and the idea that someone sat down and wrote this book. From that point on I was serious about becoming a writer though I first became a journalist. It’s been a long journey; the e-book of my debut novel ‘Ignoring Gravity’ is now on sale at Amazon, the paperback is published in December 2014.

Congratulations on your debut novel. That must have been a dream come true. Which book have you inherited from the generation above? Why is it special?

This copy of ‘Treasure Island’ was my father’s. It is from Collins’ ‘Laurel & Gold’ series, measures 16x11cm so fits easily into a pocket, and is bound in a pale green linen. In 1933 my father was nine. It is inscribed in pencil with his name and the date which makes it a second edition; the first edition was printed May 1931, the second January 1932. I especially like the poem ‘To the Hesitating Purchaser.’

Perhaps today’s books should feature a similar ode. My father passed away in 2007, so this is a treasured book.

I bought a small book from the museum shop at Tate Modern in London after visiting an art exhibition. I chose it because it is a beautiful object, filled with beautiful poems and pictures. It is ‘Songs of Innocence and of Experience’ by William Blake [Tate Publishing] first published in 1794. It fits neatly in the hand or a pocket, and contains the most beautiful illustrations. Each poem is featured in order opposite the accompanying illustration drawn also by Blake. The transition through youth to old age is fascinating and the poems, which at first seem simplistic, are deep and complex.

I would have loved this book as an 11-year old discovering ‘Animal Farm’, it has something to offer inquiring children and inquiring adults.

That sounds lovely. I shall have to look out for it the next time I’m in one of the Tate galleries. Thank you for sharing your Inheritance Books Sandra. Best of luck with your new book.

Sandra’s book Ignoring Gravity is available to buy now. You can find out more about Sandra by visiting her website, Facebook or following her on  Twitter (@SandraDanby)