Hi February, welcome to Inheritance Books. Please, tell us a bit about yourself.

Greetings, everyone! My name is February Grace, and I have been told I’m a bit of an eccentric. I don’t see how that could possibly be, really, given I only own the one cat and even if it’s true that I do have more than one pair of Converse high tops, most of them are, in fact, the same shade of pink.

I’m also a dreamer, thinker (too much oftentimes) Disney fan in the extreme, poet, and artist. I sing on key and play by ear. I have also written a couple of books. But I’m here today to talk about treasured books from my childhood, so let’s get right to it!

Which book have you Inherited from generations above? Why is it special.

I have inherited a few books from the generation before, not because they are books old enough to have been around when my parents and grandparents were small but because they are the ones who introduced me to them, and their rich characters.

I have a couple I have to give mention to before I focus on one in particular that really affected me as a child. 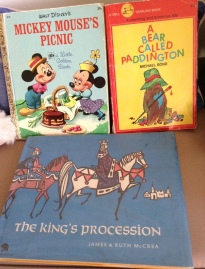 The first being a Little Golden Book called Mickey Mouse’s Picnic. This book is special to me because my Grandmother taught me to read in that book when I was two. She began by reading it to me many times, then omitted words or mixed certain parts up. I would say “No, no, Gramma, that’s not how it goes,” and she’d point to the page and say “Then read me what it says?” Somehow, one word at a time I learned to and I never stopped reading.

My parents had no idea I had picked up so much until, around that same time, my mother pulled into a gas station and was surprised when I asked her if she had money in her purse. When she asked me why, I replied “Because that sign over there says ‘Sorry, no checks.’”

The next book I must mention is A Bear Called Paddington by Michael Bond. We purchased it in a small book shop in rural Michigan while on a family trip. There was no TV there and nothing to do but read. I fell in love, and soon after my parents managed to find me a stuffed Paddington—one of the first available in the US—while on a trip to Boston. They brought him home to me and we were inseparable from that day forward. He’s a little worse for wear now, but I love him, and his stories, just the same.

The book that really affected me, though, was one that we found at the public library one day. I don’t remember the day exactly but I remember that after the first time we checked it out, I always wanted to renew it. I did so continuously for quite some time until there was a request for it at the library. At the age of four, my lip quivered more than a little when I had to hand the book back. My mother had tried to find a copy to buy, looking high and low, but couldn’t find it in print any longer.

So I handed the book back and counted the days down until I could return to the library to check it out again—only to find when I tried that whomever had checked it out after me had stolen the book, never returning it to the library again.

I looked for that book, The King’s Procession by James and Ruth McCrea, in every book shop and through every means possible, for almost thirty years.

I finally found a copy online, through a rare and used books website. I was so thrilled that, of course, I ordered it immediately. (I subsequently also found copies for my mother and daughter on the same site.)

Finally holding that book in my hands after all those years was like reuniting with a dear lost friend, and it took me back to the same emotions I felt reading the book way back then.

I still tear up, to this day, reading the story of Pipin the stable boy and his first ride with the illustrious King’s procession. How the villagers laughed and jeered at him and his little, skinny donkey. How he reacted to the bullying, with dignity, and how the King handled the situation really had a major impact on me. Also, the ending (which I do not wish to give away, you really should check out this book) in which loyalty is shown to trump vanity and splendor is a lesson that has stayed with me all of my life. Sometimes old dear things are better than shiny new ones, and that was a lesson that I was glad to be able to pass on to my own child through sharing this amazing (and beautifully illustrated) book.

Hmm, that’s more than one book, I reckon. But I’ll let you off since you had a thirty year quest to find the one you wanted.

Which book would you leave for future generations? Why? 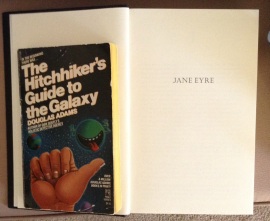 I would choose to pass The King’s Procession on to the next generation; so that they could learn the humble lessons it teaches as well. But if you really need a second book for me to also pass on, (yes, please)  then I would have trouble choosing between two: Jane Eyre by Charlotte Bronte, simply because it is such a classic, and The Hitchhiker’s Guide to the Galaxy by Douglas Adams, because it is so brilliant.

Ah, H2G2. I love those books. One day, I’m going to fall towards the ground and miss.

Thank you for sharing your special books with us, February. It was lovely to meet you.

February’s book Of Stardust is available now. You can catch up with her on her blog, on Facebook or on twitter (@februarygrace).