I’m delighted to welcome Sue Moorcroft to Inheritance Books. I once had a critique from Sue which was probably the most helpful piece of feedback I have ever had. I’ve met her at RNA events since and still regard her with a hint of awe.

Hi Sue, welcome to Inheritance Books.Tell me a bit about yourself.

I’m an English person who was born in Germany and lived in Cyprus and Malta, too, until my parents left the army when I was ten. Since then I’ve lived in Northamptonshire. I like reading, Formula 1 racing, Zumba, yoga and learning the piano.

I write romantic novels of dauntless heroines and irresistible heroes. My last book, Dream a Little Dream has been nominated for a RoNA in the Contemporary Romantic Novel category (very excited) and Love & Freedom won the Best Romantic Read Award 2011. I also write short stories, serials, courses, columns, writing ‘how to’, and I’m a creative writing tutor and Writers’ Forum’s head fiction competition judge. (I like to keep busy.)

Goodness, you’re not kidding when you say you keep busy! Which book have you inherited from your parents/grandparents? Why is it special?

A Town Like Alice by Nevil Shute is one of first adult books I read, when I was about nine years old. Dad had a copy from a book club, bound in red, which I added to my collection when he died. We’d watched the film together and so I wanted to read the book. It’s based on a true story of a group of women and children prisoners of war who were marched all over Malaya in the Second World War because nobody could find them a camp. A young woman emerged as a leader amongst them, Jean, and when she met an Australian soldier, Joe, outraged by the plight of the group, he stole them some chickens. Unfortunately, he stole the chickens from the Japanese and was crucified for his crime. Believing him dead, Jean returned to England after the war. But when she learned that he had eventually been cut down and nursed back to health, she set off to Australia to find him. 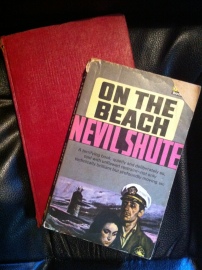 Of course, what she found wasn’t what she expected to find and the course of love never did run true, but that’s what great novels are made of.

It’s a sweeping love story in the setting of world events, and it completely gripped me. I still read it every few years.

My dad used to let me have the run of his bookcase but liked to keep an eye on what I chose. He wouldn’t let me read Lolita and I thought it had such a pretty title …

My Dad did the same. He took Anna Karenina off me when I chose to read that. I still haven’t got round to picking it up again.

This is weird – I’m going to choose another Nevil Shute book. This time it’s On the Beach. It’s a story about what might happen in the event of nuclear war. Everything’s out of control and the planet is gradually being consumed by radioactivity. The last pocket of life is in Australia and the book is about how those people spend their last months. (One gets himself a racing car – I support that idea!) The premise is thought through brilliantly. Some characters enjoy what they have, some refuse to believe it’ll happen to them, some crack under the strain. I’d like to leave it to future generations as a warning of what war can bring.

I saw the TV adaptation of A Town Like Alice when I was a teenager and read the book a good ten years after that. I enjoyed both versions. I haven’t read On the Beach, but I shall look out for it. It sounds really good.

Sue’s latest book Dream a Little Dream is published by Choc Lit. Check out Sue’s website at www.suemoorcroft.com and her blog at http://suemoorcroft.wordpress.com/ for news and writing tips. You’re welcome to befriend Sue on Facebook (sue.moorcroft.3) or follow Sue on Twitter (@suemoorcroft).